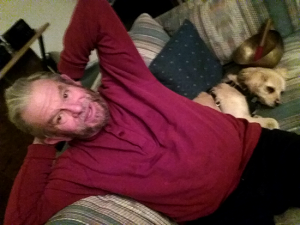 I was born a Heyoka Empath who works with people’s energy to help them heal even if they don’t realize it’s happening. As an empath, I have an incredible ability to understand the feelings and emotions of others and can even take on their feelings myself. This ability is a tremendous asset in my work with NVC clients and students.

As a boy, I earned the rank of Eagle in the Boy Scouts and was the editor of a school newspaper while living in Germany. At age 16, I spent a school year at Mungret College in Ireland. I enjoyed participating in The National Forensic League in high school, which aimed to empower students to become effective communicators, ethical individuals, critical thinkers, and leaders in a democratic society.

After high school, I decided to become a Jesuit priest until I realized that I couldn’t live without the company of women. In 1970, I moved to Washington State with my wife and two children and joined an alternative culture in the foothills of the Cascade Mountains. While there, I worked with Cascadian Farms, helped organize a coop preschool and a food coop, fought forest fires, and planted trees. These experiences helped me to discover the joys of nature, collaboration, and team building.

In 1987, I began a career in Information Technology, working as an Information Systems supervisor at a British Petroleum refinery in Northwest Washington. My primary task was to streamline workflow and provide systems to avoid duplicate efforts, eliminate drudgery, and maximize production. These experiences later contributed to my skills as an NVC trainer/facilitator. I learned how to help teams overcome resistance to change and develop the trust required for a collaborative environment.

In 2001, I attended a workshop given by Dr. Marshall Rosenberg, the creator of Nonviolent Communication, and realized that he had the same spiritual beliefs as I did. I also realized that my communication rarely reflected these beliefs and was immediately convinced that Marshall’s communication method was a powerful tool for peace as well as a powerful process for developing self-awareness, enhancing intimate relationships, resolving conflicts, and promoting general peace-making.

I volunteered with the Puget Sound Network of Compassionate Communication, serving on the Coordinating Committee and later the Core Team. Through thousands of hours of meetings, I honed my NVC skills and gained leadership experience as a Core Team member. I provided hands-on training and refined my understanding and practice of NVC, which helped the group to become a Teal Organization in the Spiral Dynamics schema and improve its communication efficiency.

In 2004, I became an NVC Trainer certified by the Puget Sound Network for Compassionate Communication. I have been deeply gratified to teach NVC, as it is the most meaningful work I have ever done. I have held workshops from Portland, Oregon, to Bellingham, Washington, and New England, and have developed six additional prepared workshops and held over 300 NVC workshops and intensives. I am also an Advanced Trainer in Neuro-Linguistic Programming and Active Listening.

I live in Albuquerque, New Mexico, and continue to teach NVC and facilitate transformation with clients and students. I particularly love working with training leaders as they have the ability to touch and positively impact others through the use of NVC. My diverse experiences and NVC training allow me to use my powerful assets with outstanding results.